I’ve had hearing trouble since 1990. Up until then my sense of hearing was quite acute, having been accustomed to listening deeply to all sorts of music on all types of systems.

So it was a shock one afternoon to suddenly hear a high-pitched whistling noise in my left ear. More shocking still was the vertigo that hit me at the same time. I was walking down Granville Street, Vancouver when the world suddenly tipped sideways and started to spin clockwise. I was staggering, dizzy and barely able to get on a bus and get myself back home.

If you’ve never had a vertiginous episode, count yourself extremely lucky. The early days of my new condition I would be lurching about, leaning on anything to hold myself upright, unable to keep anything down. Mostly I would lay in bed and moan. Walking outside was impossible.

The troubling thing in those early onset years was the changing nature of the symptoms. Some days were perfectly normal, other days would see me wake up on the whirling carousel, unable to function. Bizarrely it seemed to get worse around the full moon. Could tidal forces in the inner ear be involved?

In time I went to see an E.E.N.T. specialist who sent me for extensive testing and reported back to me that I had developed a case of Menierre’s Syndrome. He explained it as an hereditary condition that causes fluid to build up in the middle ear, causing hearing loss and dizziness. No cure was known, other than a procedure to collapse the vestibular canal; which would result in total deafness. I decided against that option.

As time goes on I have become aware of a gradual loss of hearing. Tinittus, or ringing-in-the-ears has been a constant companion. When I was first tested at the onset of the problem in 1990, I was told I had 20% hearing in my left ear, and only in the mid-range frequencies. (everybody sounds like Donald Duck on my left side).

Over the years there have been various treatments and medicines recommended and tried; but most of the drugs offer only temporary symptomatic relief and leave me disoriented and cranky next day.

I was raised in a non-traditional household, particularly in regard to health care. My father was an old-school Chiropractor and had no thing to do with drugs or traditional western medicine in general (for which fact I owe my excellent immune system. I remain gratefully unvaccinated). So having done the due diligence and investigated what western medicine had to offer, I decided my condition was something I would have to learn to live with.

As the years have passed these episodes of vertigo have decreased in frequency and severity. Though I may still get spinny when a sudden change in Barometric pressure puts me back on the carousel ride. Mostly I have learned to cope with my condition and just gotten used to it, accepting that there will be some unpredictable days when I have trouble walking around. Since I don’t have the ‘normal’ balance sensors I rely on visual cues for my local up/down (I tend to get more dizzy in the dark). Also I’ve  learned to compensate and consult when recording to make sure I’m not missing something. I work alot with Monaural mixes and do the panning by intuition, watching the meters.

Last summer (2019) I had a new hearing test that showed things were growing worse. Now only 10% hearing in the Left, only a few frequencies being picked up, and the Right ear now shows a sharp drop in hearing above the mid-range. The tinittus has slowly spread out to cover the whole stereo mix and a wider frequency band in my head, though a fuller chord of whistles sounds on my left than my right channel.

That summer I was spending many hours walking in the woods on Saltspring and I kept hearing a buzzing as if a whole hive of Bees was just over there. Also there was a constant twittering of birdies, even after dark. even inside my home. It took some more getting used to – those birds and bees are in between my ears.

So here I am.  Still counting myself one of the Luckiest bastards  alive. I still get great pleasure from all kinds of music, whether I’m listening or performing. My ‘inner ear’ helps me imagine what it would sound like to someone with two working ears.

The one thing that’s helped me deal with this handicap has been my training in meditation. Through years of study with my master I gained some mental tools that have  given me a different perspective on perceptions in general. –

We tend to accept that there is an external ‘reality’ with which our sensory organs engage and report back to ‘us’ what is ‘out there’. This is a common and understandable fallacy; but there is no world out there, and no ‘you’ (me) inside. That division is a construct of the ego, keeping itself walled-off from the world, unique and separate. It achieves this by infecting your consciousness with the disease of dualism: this/that; your’s/mine; inside/out, good/bad; and on it goes.

Maybe not my first choice, but still perfect. 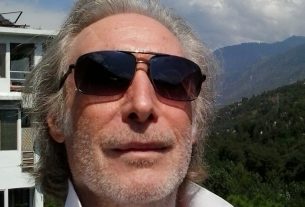 Between the Ears and Hips

6 thoughts on “Between the Ears”